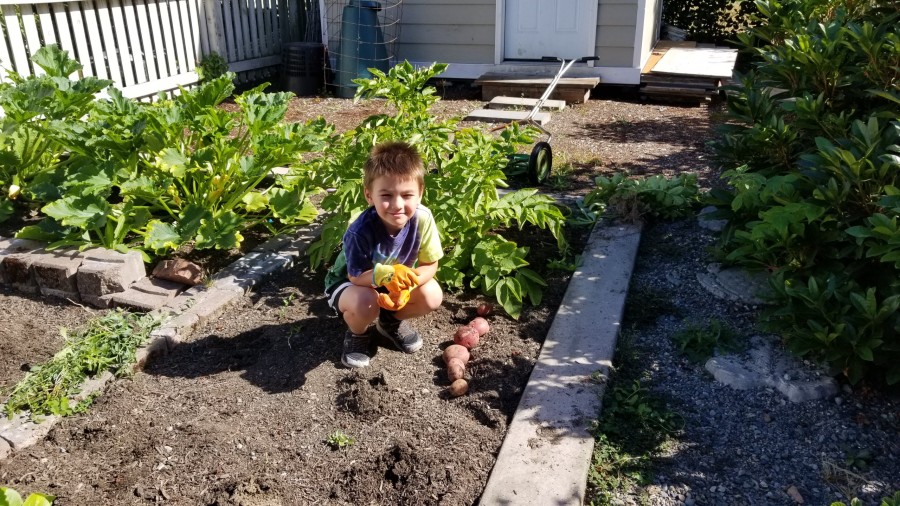 I want to share three short stories that I find very valuable and are teaching me about manifesting. One just happened a few days ago and involved my youngest son and a potato plant.

In late April, Mateo (my six-year-old) and I were planting the vegetable garden. He loves to plant seeds, water them, watch them grow and then harvest the produce. We planted carrots, zucchini, cucumbers, green beans and kale. We had a bit of space left in the SW corner of the garden and I asked him what he wanted to plant. “Potatoes!” he said with gusto, but I did not have any seed potatoes.  About a week later we went to Swanson’s Nursery to see if we could get some seed potatoes. “It is too late in the season, we don’t have any,” was their reply.  Mateo picked out some romaine lettuce to plant instead. We did not plant the lettuce in the SW corner, which we left empty.

About the same time the other vegetables started coming up (maybe a week later), we saw a plant start to come up in the SW corner. To me, it looked like a potato, so I told the boys not to pull it out when they were weeding. It was in the exact spot that we wanted to plant the potatoes, centered perfectly and everything. I could not figure out how a potato would be planted there. The year before, we had some potatoes, but they were not planted in that section. We also had purchased some new dirt to reconstitute the soil, but it was mostly woodchips and I don’t think a potato would be mixed in.  I firmly believe that the belief and desire of a child manifested a potato plant, right where he wanted to plant it. To me, it is a miracle and definitely not a coincidence. In this story, the conditions of manifestation were: pure joy, unbridled enthusiasm and belief.

From the book, “E-Squared: Nine Do-It-Yourself Energy Experiments That Prove Your Thoughts Create Your Reality” by Pam Grout, I was doing “Experiment # 4” (Chapter 7 from the book), to magnetized something into my life. Pam Grout refers to it as “The Abracadabra Principle: Whatever you focus on expands”. The instructions for Experiment #4 said to set a goal of 48 hours and magnetize something into your life.

Below is I wrote in my journal, with the dates, for what I wanted to manifest and also how it happened:

10/5/17 I intend to manifest a new cheese shredder (for the kitchen), one of the square ones that stand up in the next 48 hours. 10/6/17 1:43pm: Holy Smokes! OH MY GOSH! I was talking to my neighbors over the fence and what did one of them have in his hand? A SQUARE SHREDDER FOR THE KITCHEN, THE RECTANGLE KIND THAT STANDS UP. I asked him what they were going to do with it and he said “Donate it”. Mind you, it was the ONLY thing he had in his hand. I asked if I could have it and told him about the manifesting exercise. Accomplished!!

In this story, I believe the condition of manifestation was: non-attachment. I sent the request out the Universe (with feeling) and then forgot about it. I really could have cared less if I received the cheese shredder. They are around $10 on Amazon. I was not attached to the outcome in any way whatsoever. I was not trying to control “how” the shredder manifested. I released control and trusted and did not even think about it anymore. Inadvertently (by not caring if I got it or not), I allowed the intelligence of the Universe to choose the way it manifested.

After growing up in rural Minnesota and going to college in MN, in 1996-97 I spent a year in Germany. Upon returning in 1997 I started working at Accenture (Andersen Consulting at that time) in Minneapolis. I knew that I wanted to live in a different state or abroad or somewhere other than Minnesota for a while. I knew it and felt it deep within. I did not know how or when, but I knew I was not going to live in Minnesota forever. In 1999, a friend moved to Seattle and we stayed in touch. He said the company he was working for was hiring (during the .com tech boom). I interviewed, was hired and moved to Seattle in September 1999. I still live here. In this story, the condition of manifestation was: belief with a deep knowing (and it took 2 years).

To sum up some of my lessons about manifestation:

There are books and books written about the “Law of Attraction”, and many articles on the internet about the topic. I am still learning about this Law and definitely don’t have it mastered. However, here is a little exercise for you to gauge your feeling (and show yourself) about the importance of feeling and emotion with manifesting.

1) Think about something you don’t like and feel the emotion of it. How much negative emotion is there? How does it feel? How reactive do you get? How much resistance do you have? My guess is there is a lot of emotion and feeling (Manifestation!).

2) Now, think about what you would like to replace that thing/situation with. How much positive emotion is there? How much feeling is there that it is already existing and created? Or, is there doubt and is your mind saying, “Yeah, right. Not me. That won’t ever happen to me.” (Belief!).  If we can all learn to put as much feeling and emotion into what we DO want to create vs. what we DON’T want, we will see change.

3) Now re-write that thing that you don’t like into the positive or affirmative AND also in the present tense. For example, if you said, “I don’t want to have achy joints anymore” for the thing that you don’t like, now reframe and say, “Thank you joints for feeling healthy and strong.” To manifest, you must believe it, you must not be attached to the outcome, you must have a lot of emotion and feeling and it must be in the present tense (the eternal moment of now).  You must persist until your subconscious believes that is the truth.

I believe that we are all the creators of our own reality, even if I have not always figured out exactly how to shift what is not working for me anymore.  We are constantly manifesting, and if we are not consciously manifesting, we are on auto-pilot and allowing our subconscious patterns and beliefs to manifest for us.  The reason affirmations don’t always work is because the underlying feeling and (subconscious) belief does not believe it is true.

Will you start to practice consciously creating and manifesting with me?  It takes committment and practice and for me, some trial and error!  Please join me for the creation journey.

2 thoughts on “Manifesting and the Magic Potato Plant”